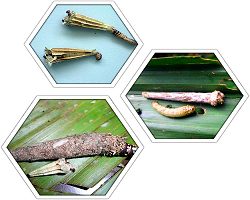 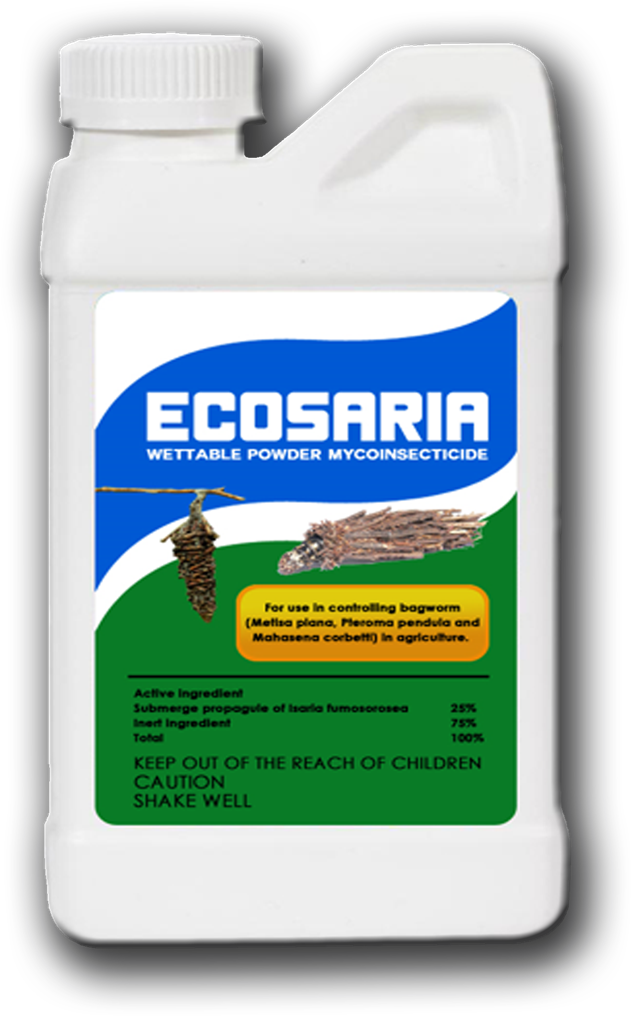 Bagworms have a destructive impact on oil palm plantation and the effect often manifests as poor yield and heavy economic loss. Metisa plana Walker (Lepidoptera: Psychidae) has become an important pest of oil palm in both Malaysia and Indonesia and declared as the most serious leaf defoliator of oil palm production in Malaysia (Norman & Basri 2007). Small larvae scrap on top and under the oil palm leaves whereas mature larva scraping on oil palm leaves leave lots of small holes and brown spots. Dry leaves debris used by the bagworm to construct the conical bags for its protection against natural enemies. The outbreak of this species alone could cause crop loss up to 44% (Basri & Norman, 2000).Pteroma pendula also one of three most detrimental bagworm species on Malaysian golden crop, oil palm and even the biggest producing country, Indonesia also threatened (Perdana Rozziansha et al., 2011). In Malaysia, this species is more concentrated in southern part of Perak. Its polyphagous behaviour has been confirmed after at least 31 species of agricultural crops and shades including cocoa, coffee, acacia, albiza and tea are reported to be infested (Norman et al., 1994; Perdana Rozziansha et al., 2011). Control measures used against this bagworm include the most commonly used synthetic insecticides.

Chemical insecticides from organophosphate, carbamates and synthetic pyrethroids groups have been recommended for controlling bagworms in the infested area of oil palm plantations (Norman et al. 2010). Trunk injection chemical insecticide like monocrotophos and methamidophos are known able to shut bagworm outbreak. However, its high toxicity led to the restriction on its usage and even banned in several countries. Other spraying chemical insecticides like cypermethrin and cyhalothrin also utilized to control bagworm population but seem to be labour intensive to cover large scale oil palm plantation. The main concern of the chemical insecticide utilization is the risk of pesticide resistance has amended the integration with other control to build Integrated Pest Management (IPM).

Bagworm of oil palm requiring an urgent solution in Malaysia. Economic loss only greatly affected if bagworm population reach outbreaks. It has been known to attack oil palm since the early years when the crop was introduced into this country. Effective control strategies for bagworm have so far proved using chemical insecticides. To minimise losses from bagworm infestation, both long and short term for pest control are necessary. The alternative using entomopatogenic fungi to controlling bagworm is good method otherwise not harmful to oil palm pollinators’ weevil. It is also can remained up to three month after spraying at the oil palm plantation.

Our biopesticide is formulated as wettable powder from entomopathogenic fungus for controlling bagworm in oil palm plantation.

Our biopesticide has ability to increase the active ingredients activities. Low cost as it does not need to use expensive technology or tools. Formulation gives good dispersion and suspension to give a homogeneous mixture in the spray solution.