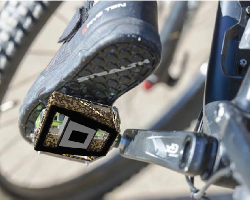 Bicycles are one of the world’s most popular modes of transportation, and according to the World Bank, it is estimated there are already more than two billion bikes used around the world in 2017 and the number will increase every year. Bicycles are also the most energy-efficient vehicle since cycling takes one-third the energy per kilometer of walking or running, so the cyclist can travel longer distances. Currently, bicycles are not only used for transportation, but also for fitness, competition, and touring. MTB Jamborees (MTB race event) challenges riders to a cross-country racing, where this type of MTB event involves high-speed with an emphasis on climbing uphill and downhill.  Distance varies from just a few kilometers and 25km to 40km-onwards. Mountain biking is the sport of riding bike through rough terrain, frequently over harsh trail, using an off-road mountain bike.  Mountain biking has also evolved into a popular and high-risk sport which challenges the mountain bike riders’(MBR) endurance. Fieldwork conducted in Malaysia from 2016 to 2018 revealed that, 85.2% of mountain bike riders were involved in accidents and sustained physical injuries during events caused by the mishandling of bike pedal.

MagKlik© is a mountain bike (MTB) pedals which functions as safety apparatus for mountain bike rider (MBR). MagKlik© equipped with magnetic lock system, it was design with biomechanics consideration. MagKlik© features were emphasized by analysing MBR leg movement while riding. Magnetic groove functions as a self-locking system that facilitates the rider during clip on and clip off movement. Function of the system is to make sure MTB rider feet always in static position while riding. It is important to avoid riders from involve in physical injuries or accident. Leg static condition is important to avoid prolonged injury in the future, to increase leg power stroke, increase efficiency and reduce energy assumption.

Fac. Of Design and Architecture